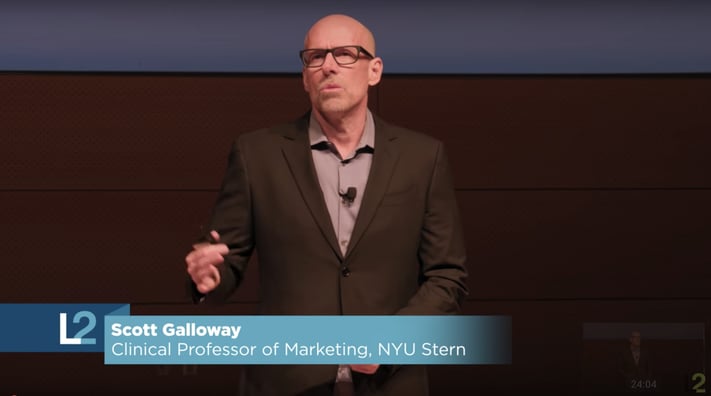 If you haven’t seen it yet, this 24 minute talk by L2’s Founder & Chairman, Scott Galloway, is a must see for anyone in Retail & Retail Tech: How Amazon is Dismantling Retail

Since we don’t all have 24 minutes, and there’s so much brilliance, I wanted to publish a short-version so everyone can capture the highlights. Sorry, Scott – but here goes:

The Retail Reckoning is Here

Scott opens by firing off the massive socio-economic shifts, primarily US-based, that are killing retail:

“Everyone’s been talking about how Retail is in for a fall. The stagnation of middle class wages, American being overstored, just Amazon, young people spending less money on stuff and more experiences… but Retail sort of soldiered on. But it feels the reckoning is finally here.”

Stats to support this:

Scott posted the data below and wanted to highlight there are some winners who are still opening stores – Sephora, Walmart, Wendy’s and Starbucks – but there are far more retailers closing stores (losing).

Scott highlighted Amazon’s fulfillment centers as store openings because he believes they will become stores in the near future by enabling services like click-and-collect. Personal opinion: If that doesn’t make Doug McMillion (Walmart’s CEO) make his innovation agenda move faster, I don’t know what will.

To put the nail almost in the coffin, Scott shares that 52% of Americans subscribe to Amazon Prime. Which overlaps conveniently with 55% of American households that make over $50,000 per year.

Amazon is taking over more than Retail

The most fascinating part of the presentation is Scott’s take on Amazon’s low profitability and why it’s not a problem.

“Amazon has essentially changed the relationship between companies and shareholders. And that is it has replaced profits with vision and growth.”

He talks for a while about Jeff Bezos likely does not ever want to become highly profitable, because that means they’ve scaled back innovation enough for the profit to take over. Walmart for instance is much more profitable, but the growth isn’t in the same galaxy as Amazons. Scott concludes, when it comes to being the most innovative company in the world, loss is the new black.

The scariest threat of Amazon is that the amount of money they have to invest in innovation means they can enter a new category almost overnight and compete with the dominant players. For instance, Amazon’s estimated 2017 investment in original content with Amazon Studios is $4.5B. They’re only outpaced by Netflix at $6.0B, and are significantly outpacing HBO’s $2.5B. Amazon is now spending more on original content than major broadcast networks.

Amazon has conspired with the consumers & technology to destroy brands

It’s no secret brands & retailers are under tremendous price pressure from Amazon. Scott says Amazon has used technology combined with consumer angst to upend premium pricing. He theorizes, “I think they’re attitude is that brands have for a long time earned this unearned price premium that screws consumers.” So through ratings and reviews, and other easy price & product comparison tools, Amazon has made it short work for consumers to do more due diligence on their purchases to find the right value.

The brand building investments made in packaging, advertising, and shelf-space, are now costing these brands the ability to price compete.

I can’t adequately summarize his prediction on how Amazon will completely take over our lives and become our only retailer in 2-3 years. If you watch nothing else, watch 14:00-15:00, and think about how realistic that actually is.

The next mile for Amazon is their investment in voice to encourage more adoption of and purchase through Amazon Alexa with more price incentives. The machine is taking over, and she just so happens to be one of the most popular household device for families. “Alexa, play Trolls soundtrack” my four-year old says (end scene).

My thoughts, not Scott's: How can retailers & brands compete?

The only unfortunate aspect of Scott’s speech is it doesn’t offer a light at the end of the tunnel. Perhaps he believes providing advice would be delivering false hope, and that Amazon is truly the only future retailer. I don’t believe this will be the case. The very same way Scott says Amazon conspired with consumers to take out premium pricing and disintermediate brands, I believe consumers will conspire with brands & retailers against the control Amazon has over their lives.

What I think is overlooked is what’s fueled Amazon’s growth. That’s the marketplace model - where over 50% of the products shipped come from third-party sellers. Amazon lists the products, and takes a commission on the sales, but the cost - storage, shipping, and customer service - are on the third party. It’s allowed Amazon to:

What do I think retailers can do to compete? Chart a new path to growth. The same one Amazon started with: Your own marketplace. It’s not about trying to be Amazon; they’re impossible to catch. It’s about remaining relevant and delivering the best value to customers - new and old.

Next week Mirakl hosts our annual conference - The Marketplace Summit by Mirakl. Our lineup of speakers will attest to how they’ve grown product selection, become more price competitive, and driven growth for their organizations with the marketplace  model. As one of our speakers Marc Vicente of Cdiscount – says, “Marketplace is not some trendy, fancy project – it is the next generation of eCommerce.”

The Marketplace Summit By Mirakl: Last Chance To Register