Spoiler alert: This was the best commerce conference I’ve ever been to. The quality of content and overall experience was so high I’m sad to leave. So the award for BEST COMMERCE CONFERENCE GOES TO: Recode for Code Commerce.

Why? This wasn’t your average 2-day conference. It was small – maybe 500 attendees? And notably lacked a massive exhibit hall which makes everyone feel gross – retailers, brands, and even tech companies included.

The quality of speaker was so high from Jeff Gennette the CEO of Macy’s to Sarah Frair the CFO of Square to my personal favorite – Scott Galloway, author of The Four and founder of L2. His content was fresh, but still carried an “Amazon is the retail Deathstar” vibe that kept everyone on their toes.

I think the best way to recap the greatness is by handing out awards. Unofficial by Recode standards but completely official to me, I hope you enjoy my personal favorites: Scariest, Biggest comeback, Least innovative, Least humble, and Best dressed.

Here are the unofficial/official awards of Code Commerce 2018: 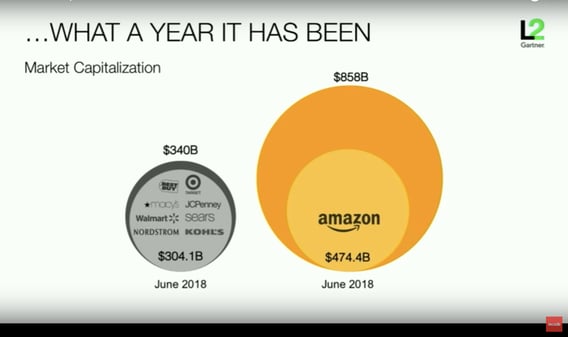 Compared to the Seattle giant which added $380 B in market cap, more than the total of all of the leading retailers. 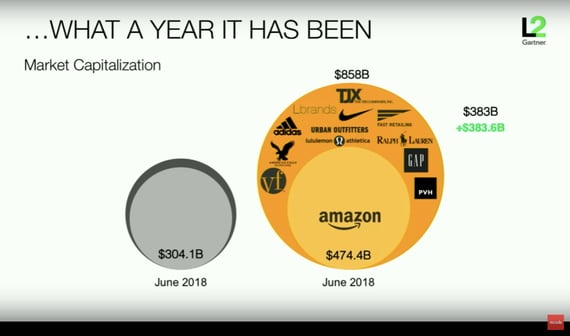 But the newer part of his speech since publishing The Four addressed the idea of Antitrust and whether the government is getting ready to break up Amazon. While he argues Donald Trump has negatively impacted the government’s ability to do this, he also feels it’s time. “I think these firms need to be broken up because the key to competitive markets is capitalism…We break up big tech because we’re capitalists and it is time.” What’s scary? Until then – he leaves the room reeling on the idea that it’s impossible to stop – or compete – against Amazon.

Before yesterday, I would not have said Macy’s is fully committed to winning back the hearts, minds, and wallets of their customers. Today I would. Jeff Gennette is turning this ship around. On Monday, Jeff addressed hard-hitting questions on the turnaround plan and all of the ways they’re moving Macy’s forward. From innovative business models like Retail-as-a-Service (leasing in-store space to up and coming brands), to Virtual Reality experiences for furniture buying, to their strategy to take on the highly competitive beauty market by breaking out of their prior brand-centric approach. They’ve relaunched the loyalty program with no barrier to entry, and handsome benefits for shopping across channels.

I nabbed a spot in the in-store experience Tuesday at their Herald Square flagship store where President, Hal Lawton, demonstrated the furniture VR experience, EVP of Beauty, Nata Dvir, demonstrated their beauty apps, and EVP of New Business Development, Marc Mastronardi, showcased their Marketplace “Retail-as-a-Service” concept. It was inspiring and refreshing – I only wish the Marketplace strategy was online as well. I really appreciated the time their leadership team took to showcase the investments they’re making to win customers back and secure Macy’s future. 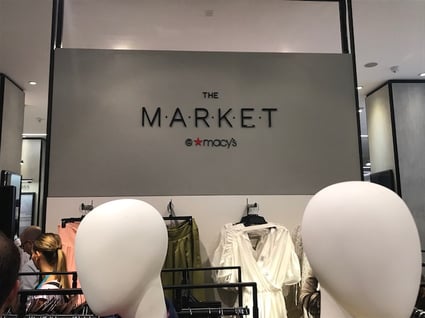 They’ve come from closing 100 stores in 2016 and 14 straight quarters of declining sales to three consecutive quarters of positive same store sales, and I’m rooting for them.

Haters gonna hate because I know we all use Instagram – BUT I had higher hopes for this session. I’m sure this is a natural byproduct of having been acquired, but commerce just isn’t there on Instagram. “Where’s the buy button?” Recode Senior Editor Kurt Wagner asked… “That’s an interesting problem to solve for” was the answer. Retailers and brands are pouring money into advertising on the platform, and it is still obnoxious to buy from Instagram. They're improving - but slowly. Today I can at least link out to Madewell's product page for the exact item I want to buy - and that's good - but great would be "Buy Now" inside Instagram.

CEO Tobi Lütke seems like a good guy. A really good guy. He explained Shopify as a mission, not a company. He said the point of Shopify was to reduce the barrier to entry to starting a business online: “Shopify is this exercise of taking the crazy learning curve that's involved in starting a business and allowing people to run an attempt against it." Through supporting some of the newest online businesses like Kylie Jenner’s wildly successful Kyle Cosmetics, to helping 100-year old CPG companies find a way to reach customers directly, to their own success becoming a public company – Tobi seems to maintain a humble attitude while committed to the goal of continually removing the barriers for anyone who wants to build a business online.

First – Kudos to Stripe for entering the brick and mortar business. As the co-founder + President John Collison explains – Online business are going offline.  The pivot will be painful for Stripe but it’s necessary to support brands and retailers as eventually every successful company will have an Omnichannel experience.  Second kudos is for their developer centric approach – it’s smart and has been very successful. I don’t know if you’d call it “Developer marketing” because I’ve tried that before and short of “Free t-shirts” it’s very hard to market to developers… but it’s close. The bone I have to pick is that as Jason Del Rey launched one respectful but hard question after the next, the responses were condescending. I get it; It must be hard to be a young president. But some brand marketing basics are missing here.

Crate & Barrel CEO Neela Montgomery and Zola CEO Shan-Lyn Ma, announced an exclusive partnership where Crate & Barrel will offer 3,500+ products on the Zola platform. Neela said, “We see the growth and digital innovation of a company like Zola.” Zola, primarily a wedding registry destination, previously had 60,000 products and saw a great opportunity to add Crate & Barrel products. Shan-Lyn shared that they could see their customers were registering for millions of dollars in Crate & Barrel products and were able to approach the team with that data to showcase why it makes sense for the customer. Keep your friends close; your enemies closer.

Most useful: Framed + Away

Because I study the world of online marketplaces, I’m looking at Amazon and Alibaba every day. Alibaba (Who owns JD.com) spoke at our Marketplace & Platform Summit this year and made a similar impression. That impression is: Holy sh*t.

Hui Cheng, JD.com’s head of Silicon Valley research center, dropped some knowledge. While in the US we’re happy to get same day/next day delivery in the past couple years, JD was doing in in 2010. They’re the 3rd largest online retailer in the world, and in last year’s anniversary period JD.com sold 200 million items – which Hui pointed out would mean every person in the US would have received 2 items. The most fascinating part was a showcase of their logistics capability. Wait for the tiny robots to come out at around 2 minutes. Just as impressive as Alibaba + Fords car vending machine. The US government may not take down Amazon, but China might.

Five years ago Instacart signed a huge partnership deal with Whole Foods. Just imagine what happened when they heard Amazon was acquiring Whole Foods. Turns out - it was just about 2 weeks of silence/shock, followed by every other major grocery retailer in the US signing a strategic partnership with Instacart. The grocery market is poised for massive innovation, ready to take on Amazon/Whole Foods, and Instacart will be at the center (and still delivering from Whole Foods…at least for now). Instacart Founder and CEO, Apoorva Binney said, “Whole Foods is 1.5% of the overall grocery market. Most American's don't shop at whole foods. The retailers most Americans shop at are partners with Instacart… like Albertson’s and Aldi.”

So they now help millions of "unbanked" or "underbanked" Americans with Square Cash - good, but the CFO Sarah Friar also talked about their investment in women in business – inside their organization and out. Sarah said, "You can't be what you can't see. I'm proud that over 60% of the organization reports into a woman.” Square’s investment arm, Square Capital, is also focused on investing female founded businesses. Love.

Former Rent the Runway co-founder Jenny Fleiss talked about her newest startup: Jetblack – “A members only personal shopping service for affluent city moms.” Backed by Walmart’s Tech Incubator Store No. 8 – what they’re really developing is subscription-based clickless commerce. It sounds awesome and I want it. If you’re an affluent mom in Manhattan, get on their list!

Hamdi Ulukaya has built a business valued at $3-5 billion and in 2016 gifted 10% of it to his employees. Over 30% of Chobani’s workforce are immigrants or refugees, and Hamdi has unintentionally become an activist against how the current US administration is treating immigrants today. The presentation will give you all the feels and make you want some delicious Greek yogurt. “We need CEOs and companies to be human.”

CEO EmilyWWeiss says glossier gets five direct messages a minute on Instagram. "We’ve built this D2C relationship and yet we still outsource our engagement to other platforms." #codecommerce pic.twitter.com/x21qjntP2F

I only wish I’d tagged the right handle when I posted this:

#codecommerce kicks off with @karaswisher objectifying @JasonDelray and it’s a beautiful moment where for once the dude gets asked about his outfit 😍 pic.twitter.com/iVres70Mg5

@DelRey, thanks for a truly great event.

Truly authentic, no holds barred, yet empathetic questioning throughout the event. Alternative award: Funniest. At the end Sarah Friar’s session she quipped, “She’s amazing. She should be CEO. Maybe if the current CEO would give up one of his two jobs." True that. Catch the new podcast series launching in two weeks – Pivot – where Kara and Scott Galloway are going to argue nonstop. Guy Raz, Dax Shepard, and Kara Swisher’s other podcast, LOOK OUT… you’re getting replaced.

To hear more from me sign up for our blog 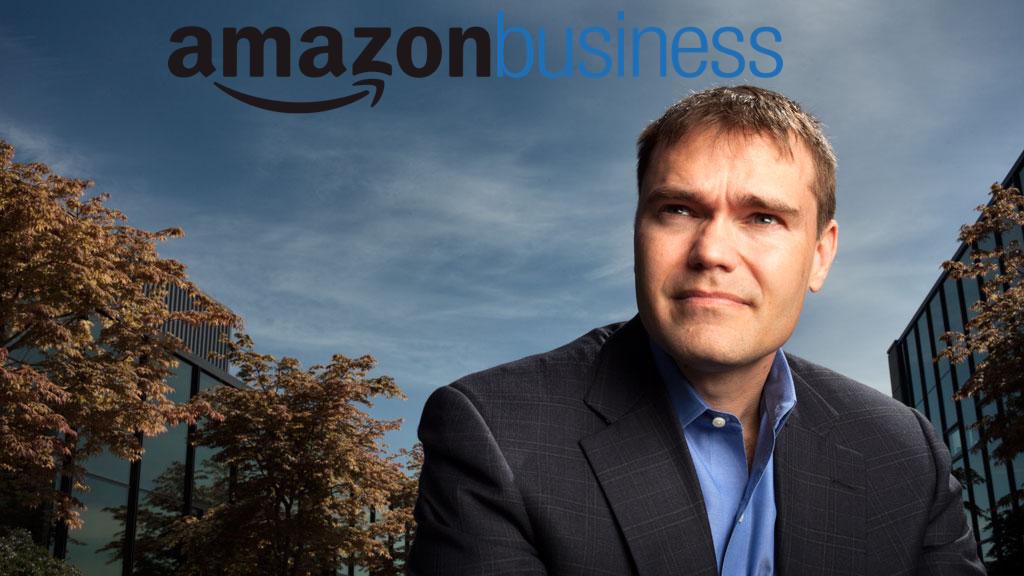 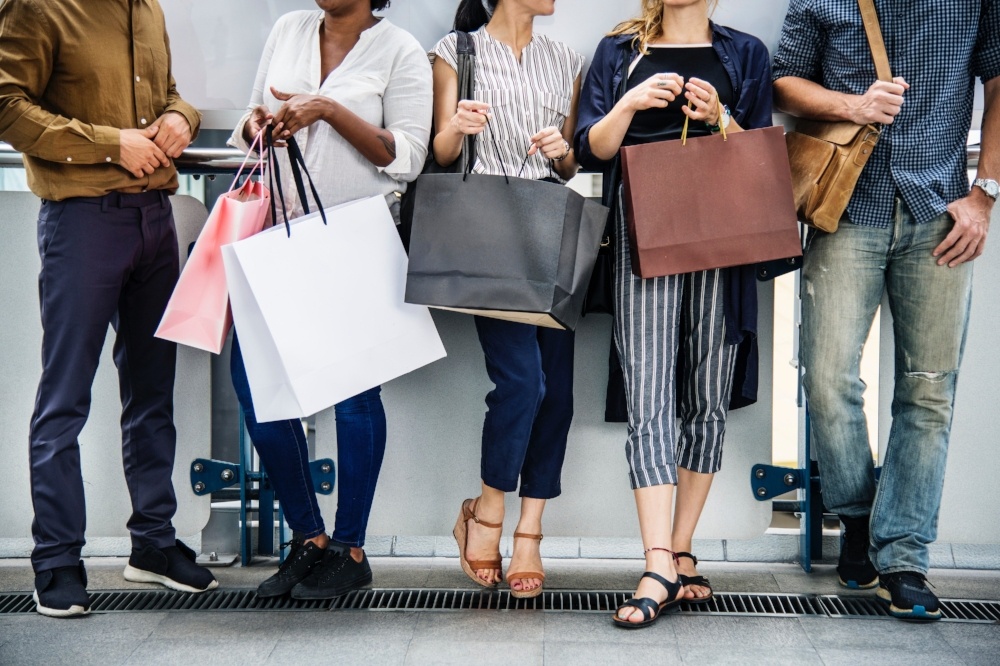